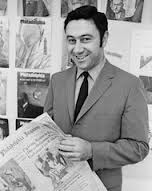 Gaeton Fonzi has died, age 76. He was one of the most dogged investigative reporters of his generation and the author of what is widely regarded as the most persuasive book arguing that President Kennedy was murdered in a conspiracy that the Warren Commission willfully chose not to investigate fully.

Here's the obit in the Philadelphia Inquirer.

Like most serious investigative reporters, Fonzi could seem like a nut, especially when he was intensely focused. But he usually delivered, even if some of the prose was purple.

I think he indirectly helped clear the way for Gene Robert's fabled Philadelphia Inquirer that gained traction starting in 1972. In the late 60s, Fonzi and Greg Walter broke the story, in Philadelphia Magazine, of the old Inquirer's master shakedown-artist, a thoroughly corrupt reporter named Harry Karafin, who was blackmailing major Philadelphia businesses and institutions when the Inquirer was owned and operated by another scoundrel, Walter Annenberg, a gangster's son who had parlayed the Inquirer into an enormously successful business empire that included TV Guide and television stations.

Fonzi also wrote a book about Annenberg, who evidently decided by late 1969 that Philadelphia had become too inhospitable, or at least insufficiently malleable, and sold his paper to the reputable Knight Newspapers chain, which later became Knight-Ridder. The rest was journalistic history. Annenberg, who had prostituted the Inquirer shamelessly, received his reward from Richard Nixon, who named him ambassador to Britain.

While Annenberg went to the Court of St. James (and would later become better known for his and his wife's philanthropy), Karafin went to prison.

Fonzi, I always thought, had helped Annenberg make up his mind to sell the paper and blow town. And like a surprising number of other Philadelphia journalists from that era, he had started out at the then-scrappy Delaware County Daily Times -- where I myself had my first job right out of the military, as a columnist, before I went to the Inquirer in 1970.

Incidentally, I never got the chance to share with Fonzi my own take on the Kennedy Assassination, which I call the Sharkey Unified Theory. To wit:

Lee Harvey Owsald did it, acting alone that day. But at the same time there were at least two ongoing conspiracies to kill JFK in various stages of planning and preliminary execution at the time Oswald fired those three shots. Kennedy, clearly, had an array of powerful and resentful enemies.

Oswald, known for being unstable even to conspirators who might have met him, had some association with at least one of those conspiracies. But he nevertheless acted on his own that day. When he killed Kennedy, members of the actual conspiracies -- which overlapped at the edges -- were dumbfounded, and assumed that the the deed had gone down, somehow. Hence the mob's hair was on fire, as was the hair of the Bay of Pigs renegades. None of these players were known for a high degree of competence, after all.

The Sharkey Unified Theory accounts for all of the anomalies unearthed in the endless conspiracy-theory speculations, including Jack Ruby, lashing out in the mistaken belief that Oswald was working with the mob conspiracy. Both (or all) of the conspiracies to kill Kennedy were dangerous and ruthless, but also half-assed in their planning and organization. Hey, no one ever said the Bay of Pigs exiles or the mob were geniuses!

So the truth has actually been out there hiding in plain sight all along, in fractured pieces lying among among all of the incorrect shards and theories. And my guess is that some aged villains to this day believe they were part of the plot, unaware that Oswald, for his own twisted reasons, beat them to the trigger.

Fonzi might not have bought it, but he would have considered the possibilities.

Posted by Joesharkey.com at 3:08 PM