Hey, NRA: Sister Angelica Explains it All for You 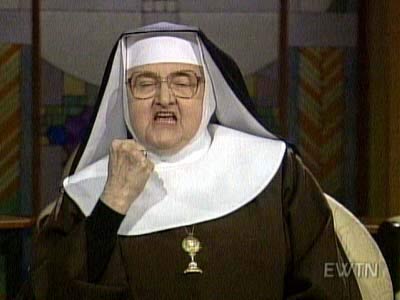 The National Rifle Association,  this time in the guise of a hired "task force" that the firearms lobby hilariously describes as "independent," wants to arm teachers and principals with guns in the classroom, in preparation for the next homicidal maniac who slaps one of those high-capacity magazines into another one of those assault weapons and charges into a school firing on the children.

Hey, what could possibly go wrong with having your social sciences teacher packing heat?

I'm suggesting that the NRA's loud-mouth draft-dodger head Wayne La Pierre and his hired stooges could benefit from what has been shown to be an extremely effective classroom deterrent, a knuckle  sandwich from the likes of Sister Angelica of blessed memory.

Instead, the press-release warrior La Pierre, who has been an NRA bureaucrat since a few years after he cravenly dodged the Vietnam draft while at the same time expressing support for the Vietnam war, is parading around with a new 225-page "report" from a task force composed of people who stand to make money if its recommendations are somehow stupidly adopted (as Lawrence O'Donnell pointed out on MSNBC last night).  Of the task force's 13 members, I see from the report, four are employed by an Idaho-based armed "combat reality training" company called Phoenix RBT Solutions.

To no one's surprise, the task force recommendations are predicated on putting guns into schools, not reducing firearms outside of schools. The recommendations are that armed officers be hired for every school in the country, and that states relax gun-carry restrictions to let teachers and administrators pack firearms in all schools.

Of course, besides serving the NRA's main purpose of selling more guns, the plan would peddle some kinds of "training." That is, firearms training from ... corporate interests who make money selling weapons training and defensive strategies. (See Phoenix RBT Solutions, for example) And, of course, there would be a component of  psychological "evaluation" -- that is, intervention into the daily routine of a school by outside interests from the psychology industry, which makes a lot of dough already peddling intervention services to the worried who happen to be covered by insurance or government reimbursement policies. Oh, and police officers and other outsiders would have a daily role in identifying potential trouble within the school, by staying informed through routine interaction with students and teachers. Basically, the police officer at the school would always be nosing around, rather than just standing guard.

On my old block in Philly, we called that a police state.

Yesterday, a gun-lobby mouthpiece named Asa Hutchinson, a former Republican congressman from Arkansas mainly distinguished for having been in the forefront of the pitchfork-carriers leading the House impeachment against Bill Clinton, got lots of credulous publicity in Washington. Summoned by the NRA, members of the so-called Washington press corps trooped dutifully into the risibly named National Press Club to sit quietly while Hutchinson sold the seemingly unsellabe.

[To its credit, the New York Times, reporting today on this "news conference," noted that the event,  packed with reporters, had "unusually heavy security," including an explosive-sniffing dog. "A dozen officers in plain clothes and uniforms stood watch as [Hutchinson] spoke; one warned photographers to 'remain stationary' during the event," the Times reports.]


No indication of whether photographers meekly complied, though I'm guessing they did. No information on who paid for those "uniformed officers" (Washington D.C.?) on hand to guard the honorable Asa Hutchinson against the perceived lethal threat from the notebook-and-Nikon-wielding news people.

And by the way, media, can we please stop reporting on staged events like this at the "National Press Club" (which touts itself as the "world's leading professional organization for journalists")  without also providing the information that the National Press Club, its fancy facilities, and its impressive podium, are available for hire to anyone seeking to promote anything in a setting that appears to be professionally sanctioned by journalists.

From the National Press Club Web site: "...the Press Club is a world-class conference and meeting facility that hosts thousands of events each year for sophisticated clients from around the globe. Our professional staff is expert at coordinating banquets, receptions, news conferences, meetings, symposiums, webcasts and satellite media tours..."

Put simply: "Yo! We're for hire."  Just like Asa Hutchinson and the NRA task force which, as Lawrence O'Donnell pointed out, included not a single teacher or school administrator.

[For anyone inclined to wade through, here's a link to the 225-page NRA report released yesterday.]