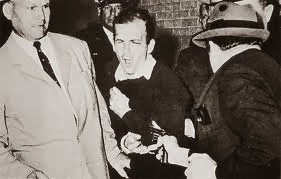 saga, now that we're up against the 50th anniversary of that awful day when those shots rang out in a hotbed of virulent right-wing hatred that was the city of Dallas in November of 1963.

And the rehashes of the conspiracy theories are at full volume. Thankfully, sensible voices are among them, like this one by Fred Kaplan in Slate that discusses why the "magic bullet" didn't really have to be so magic at all.

Myself, I firmly believe that there was a conspiracy to kill John F. Kennedy, a man who had many dangerous enemies and whose reckless personal behavior nurtured still more..

I also firmly believe that Lee Harvey Oswald, acting alone, shot and killed Kennedy from the assassin's pitiful perch at a window on the Sixth Floor of that school book warehouse where he worked (and lurked) on Dealey Plaza in Dallas.

Well, I regard my theory as the only one that accounts for all of the indisputable actual evidence (as opposed to the distorted or false assertions and outright lies) that has accumulated to support the idea that there was in fact a conspiracy to kill Kennedy.

The man, lifted to sainthood in the Camelot mythology that his widow and disreputable family, abetted by the worshipful media, worked so hard to maintain all of these years, had powerful enemies. Some of them, without doubt, hated him enough to be classified as potential mortal enemies. among them were elements of the mafia, institutionally and personally aggrieved (Kennedy's pathological philandering encompassed mob girlfriends, let us not forget, definitely a complicating factor in one's mortality). So the likely suspects include elements of the mafia, perhaps in league with rogue quasi-military elements tossed seething onto history's sideline with the the Bay of Pigs fiasco. There were also fanatic right-wing radicals who coalesced in Dallas, partly under the aegis of the oil billionaire crackpot H.L. Hunt, and probably in cahoots with anti-Kennedy zealots who had military backgrounds and simmering resentments about the way things were going in Washington. I don't even include Fidel Castro & Company on this list, though Fidel & Co. certainly had motive and, arguably, at least some means and opportunity, given the loony careening that Lee Harvey Oswald did through various communist precincts in the years before he focused his hatred onto one shining uber-celebrity and crouched at a window on Dealey Plaza ready to fire.

I am, incidentally, persuaded that forensic science has adequately explained the so-called "magic bullet" that was the main sticking point for many of those otherwise believed what the Warren Commission said: That Oswald did it, and did it alone.

Every single cogent objection to that theory can be explained and accounted for -- if you accept that there was one, and perhaps more than one, actual conspiracies in the works in 1963, perhaps in semi-organized form -- at that exact time that Oswald did the deed by himself.  And when Kennedy was killed that day, my guess is, those other conspirators were dumbfounded, because they somehow thought they had a part in it.

One can see them phone one another feverishly asking, "How did it go down?" Or, "Who said it was going to be Dallas?" Or "Who the fuck is this Oswald guy?" (The answer to which might have been, "So-and-so ran into him a few months ago, that's all I know.") And another suggestion might have followed: "We gotta shut him the fuck up!"

To me, with some knowledge from many years as a reporter how the mafia actually works, the Mob is the most likely candidate for at least the lead role in a botched conspiracy, though I certainly suspect that Dallas right-wind fanatics might also have had an operation in the works on their own. As to the mafia, I once in the early 1990s spent some days interviewing a prominent mob hit-man in the witness protection program, a man who had murdered many colleagues on orders -- and I recall how amazed I was at his recounting of various dastardly and infamous deeds that were accomplished only after numerous botched attempts, some of which ended in failure in circumstances that can only be described as farcical.

Before it disappeared in the late 1990s, the mafia was insidious and extremely dangerous. But it was also made up of basically lazy (though violent) men with limited IQs and minimal skills in the sort of social communications that would be needed to successfully manage and complete an intricate, delicate, complex, high-level conspiracy followed by a decades-long cover-up.

So, even though the mob never pulled the trigger that day, this conspiracy or separate (but perhaps overlapping at some points) conspiracies was gloriously botched at every step of the way. So was the cover-up, but the true details of it I am certain have long been hidden in plain sight, woven into in the quite visible thicket of conspiracy, fact, supposition, wishful thinking, false lead, deception, and modifications of deception.

To this very day, I believe, there are old men with murky pasts who suspect, but have never known for certain, that they had a role in a conspiracy to kill John F. Kennedy.

Who was killed, I am willing to bet money, by Lee Harvey Oswald, a pathetic loner with a grudge and delusions of grandeur, acting by himself that day.