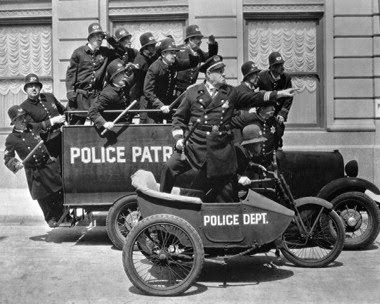 This just in: Media and government weather hysterics in New York and New Jersey look a little foolish today (again) as the snowstorm, widely hyped in dramatic government and media accounts yesterday as being "historic," well,  the damn thing failed its history test.

We're used to seeing politicians like the excitable New Jersey Gov. Chris (Thar She Blows) Christie   all in a frisson about some impending crisis or another, when he's not chasing around the country in the delusion that he might become president, or yelling from behind his bodyguards at a Jersey teacher who had the temerity to ask him a pointed question. (I awarded Christie the "Thar She Blows" moniker some time ago for his tendency to overreact and blow his stack during past impending forecast weather disruptions, not to mention pointed questions from the public -- and not because of his size, incidentally).

New York Gov. Andrew Cuomo might be given a pass for his overreaction this time, because the poor fellow is stuck in Albany, N.Y., and that's enough to affect anyone's good sense, especially during the dead of winter.

The New York mayor, Bill de Blasio is a new entry in the Chicken Little derby that transpired as the fairly routine, if big, winter snowstorm developed yesterday, and the implications of his own reactions and especially exclamations are troubling. De Blasio, who knew nothing more about the impending weather than what he read in the papers or saw on TV, all based on urgent National Weather Service bulletins, basically shut down the city Monday night and into Tuesday morning.

De Blasio will long be remembered for telling New Yorkers that, not only could they not drive a car or ride a bus or subway, or pedal a bicycle to deliver Chinese food, they shouldn't even be on the sidewalks. The Boston mayor said the same, but made it sound more like an order under martial law -- but that's just Boston again. Remember how they ordered all citizens to remain indoors when the cops were looking for the Marathon bombers, who were found, as I recall, cowering in a stored boat in someone's backyard?

De Blasio made several painfully memorableutterances yesterday, and the best one (as the New Yorker magazine pointed out today without being so rude as to make note of 9-11, the Draft Riots, the Triangle Shirtwaist fire or the Giuliani Administration) was: "prepare for something worse than we have seen before,"

Even today, under fire for overreacting yesterday, de Blasio seems to be continuing with the overly dramatic language. "We dodged a bullet," he said.

Of course the media were crucial players in the Chicken Little Derby yesterday. Reading and watching from a continent away, I was amazed at the high degree of excitement in media accounts. The media fanned the official overreactions, tripping over themselves not only to dramatize a weather forecast but to do so with endless updated bulletins, each more urgent that the previous, all characterized by overly dramatic language including, in several online accounts I saw yesterday, the use of the word "tragic" to describe the likely effects of this forecast storm.

City halls and the state houses are probably hopeless, and the National Weather Service, where I believe the origin of the word usage "historic" will be found from yesterday, seems to have been a basic part of the problem. Still, I do hope someone starts looking more closely at the propensity of government officials who anticipate a crisis by invoking various measures of what can accurately be called martial law, like ordering citizens to "shelter in place." We're probably going to want to have some checks and balances on those martial impulses, the next time there is a genuine civil crisis to deal with.

The apologists are at work today, pointing out that it did in fact snow hard east of the New York area and, of course, in Boston -- where a routine big snowstorm didn't used to be treated as the end of the world.

I think the essential problem was the alarming language used yesterday in this endless incremental news-updating,  the incessant lunges for immediate attention that the online world has created, and which will never be un-created, So as we assimilate these realities, let's hope the better elements of the media reflect on this poor performance, The bright rookie "web design" whiz-kids constantly updating online news reports to incessantly grab attention definitely do know one big thing, but the reporters and editors who have been around the track a few times know a lot of little things. The two should talk more often.

(And just as a side note: When an editor describes a rookie's reporting on breaking news as "breathless," that is not meant as a compliment about the reporter's enthusiasm.)

The New Yorker online today reliably has a sensibly humorous take in a piece by Colin Stokes. [Here.] Among the suggestions for city dwellers "braced" for winter's worst: "Wear ice skates all the time." Also, "When the blizzard doesn't actually happen, take the day off work."

But let me offer some serious media post-mortem suggestions, for starters:

1. Let's definitely avoid using the word "historic" when there is no actual "history" to report yet.

2. Other words to avoid in weather-forecast advance reporting: Barrel ... Fury, usually accompanied by "unleashed" .. Bear down. ... That list is longer, but you get the drift. (So to speak, since the subject is snow).

And be wary of  anyone today who says "Better safe than sorry." That excuse is posted at the trailhead of a long, slippery slope, even if there is no snow underfoot to speak of.