Christmas in New York, and Visitors At All-Time High 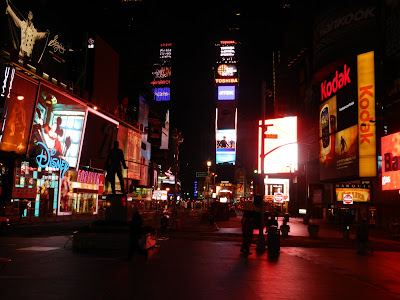 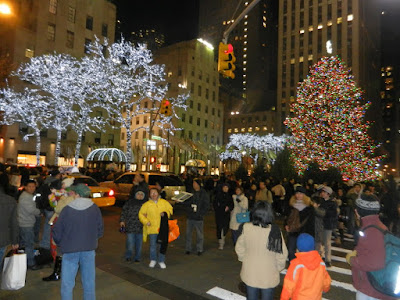 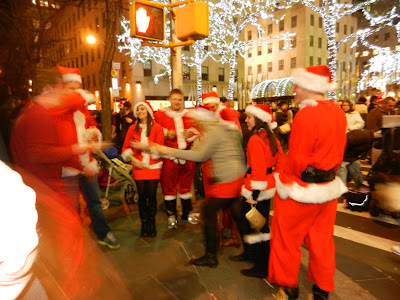 [Top photo: Hah! The City That Never Sleeps IS Caught Sleeping, on my 5:30 a.m. bagel and coffee run from our Times Square place, on a Sunday morning. I have no idea whose these people are in the other photos, but they seem to be enjoying themselves at Rockefeller Center.]

I was in New York City last week for a few days, the second time in a month.

It's interesting to visit New York, one of my favorite places in the world, after living there for over 25 years. You still get that familiar, proprietary feeling.

And it's especially nice at Christmastime, even though the hotel rates were ... uh, bracing in November and for the first three weeks of December. This week, on the other hand, rates are way down with Christmas so close. For example, you can get the perfectly nice Hilton Garden Inn just off Times Square for a total of $348, including taxes, for tomorrow and Thursday nights. We stayed there during our earlier visit in November, when it cost a lot more. It's a good hotel, part of a good trend as the better-run mid-level brands, best known to business travelers elsewhere, are making moves into the expensive gateway cities, where they're giving much-needed competition to the bloated legacy big-city hotels.

Meanwhile, the city said today, by the way, that the city will have attracted more than 50 million out-of-town visitors this year, which is said to be a record.

"Five and half years ago, we set an ambitious goal to reach 50 million visitors by 2015, and in 2008, we accelerated that goal to be the end of 2012," the Mayor, Michael Bloomberg, said. "Today, we know that we will exceed this significant milestone by year’s end."

The tourist bureau, NYC & Company, forecasts the city will attract a record-breaking 10.1 million international visitors in 2011, a 4 percent increase over 2010. The UK is the top origin for overseas visitors with more than 1 million visitors expected by the end of 2011. New York City is also on track to generate $32 billion in visitor spending.

A chunk of which my wife and I contributed trip last week. You're welcome, Bloomberg.

New York City continues to hold its position as the number one port of entry for the U.S. and the number one U.S. destination for overseas travel with approximately one out of every three visitors to the U.S.