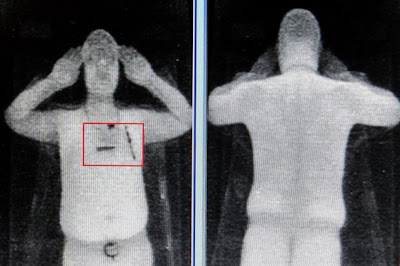 The Sunday Times of London has a story today, though it's thinly and perhaps questionably sourced, saying that "Western intelligence agencies believe doctors working with Al-Qaeda in Yemen have been trained to plant explosives inside the bodies of suicide bombers."

Bombs can be implanted in the abdomens and breasts of suicide bombers, the story says. That would evade the vaunted "whole body scanners" in use at airports, which supposedly detect anomalous forms or mass on the body or in the clothing.

It's questionable whether the body imagers actually work, in the first place. If the London Times story is correct, it's irrelevant.

The London Times is owned by the odious Rupert Murdoch, but like the Wall Street Journal, another Murdoch property, it still does have a reputation for accuracy, though you can't depend on it.

From the Times account: "Experts say explosive compounds such as PETN (pentaerythritol tetranitrate) could be implanted into a would-be suicide bomber and the wounds allowed to heal." The device "can be detonated by injection," says the paper.

Note the conditionals, could and can.

And note the lack of attribution, which follows standards more like those of the Daily Mail or the New York Post than of the pre-Murdoch Times of London.

Still, it seems plausible. That doesn't make it true, and stories anchored by mere plausibility are among the lowest forms of journalism (right after lottery-fever stories and all articles by anything called the White House press corps, that is).

Posted by Joesharkey.com at 6:57 AM