Packing for the Airport (Updated) 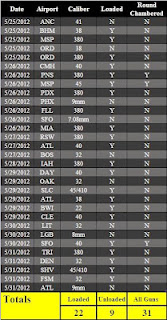 The guns keep on coming at TSA checkpoints. The chart above is the latest tally (of guns found at airport checkpoints in the week ended yesterday) on the always informative TSA blog.

As I pointed out in my New York Times column this week, the increase in guns being found at checkpoints coincides with ongoing liberalization of "right to carry" laws being pushed by the NRA in many states (and also at the federal level) and the overall increase in gun sales in general.

The TSA claims that most people found trying to take a gun onto a plane in a carry-on bag say they simply forgot they had it in the bag. Nobody really buys that, except as it might apply to a few knuckleheads who would forget their home address if it weren't printed on their drivers license. Fundamental gun-safety education says you should always know where your weapon is. Always.

There are absolutely no indications that people with terrorist intent are taking guns to the airport. Instead, the increase in guns being found is likely to be attributable to a growing belief in the gun world that people who legally own and carry guns have a right to carry anywhere.

You can, of course, travel by air with a firearm if you pack it in a checked bag and declare same to the airline when you check it. Here are the TSA regs on that.

And no one knows, of course, how many guns are actually being sneaked onto planes by passengers who manage to slip them through the checkpoints.

Incidentally, I like the TSA Blog, but I do wish that the agency would man-up more on the subject of people trying to get guns onto planes. The weekly running tally is great, but the blog takes a somewhat breezy attitude about the threats posed by firearms coming through checkpoints. In my opinion, that's because the NRA has such fearsome political clout in Congress, which can yank the TSA's chain at will, and does.

Instead of hammering on guns at checkpoints and the people who bring them, the TSA Blog puts more focus, actually, on something that is none of its business, legally: Drugs discovered by those abominable body-scan machines.

From the current blog (my emphasis):

"Body Scanner Discoveries This Week – There were nine incidents this week where body scanner alarms resulted in drugs being found on passengers using imaging technology. Items were found everywhere from pockets to the breast, to the groin area at EWR, SAT, ORD, TPA, PHX, SFO and GEG. In addition to these discoveries, there was also a passenger at Tampa (TPA) who had a white drawstring pouch concealed in his underwear containing several types of Narcotics. (See Picture) Another passenger at Chicago O’Hare (ORD) had marijuana taped to his ankle. We’re not looking for drugs, but finding these nonmetallic items in areas where explosives could also be hidden is a testament that the technology works. "

Well, not to be tendentious, but 1. Finding a wad of marijuana stuffed into someone's shorts is hardly proof that "the technology works," except to identify a wad of something in someone's shorts. There have been some disquieting studies showing that these scanners actually are pretty easy to beat by someone who knows how to conceal a weapon. And 2. Drugs, as the TSA blogger chattily notes, are really none of the security agency's business.

Somebody with a bag of pot isn't going to be able to take over an airplane. Somebody with a gun who waits for the vaunted fortified cockpit door to open so the pilot can use the bathroom is. Passenger vigilance works only to the extent that somebody does not have a gun at a flight attendant's head. Or worse.