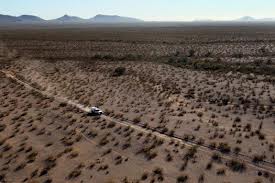 The knee-jerk proclivity of the media -- local, regional, national -- to buy into pre-existing narrative is on full display this afternoon in southern Arizona, where the story of a Border Patrol agent killed by gunfire early Tuesday morning has gone off-narrative.

I suggested it would probably do just that, when I posted here a few days ago a suggestion that perhaps reporters on the scene might want to start asking some basic questions about the Border Patrol's initial accounts of the incident.

After days of credulous, half-baked media accounts that struggled to fold this particular tragedy into the "fast and furious" narrative, it now is becoming clear that the fatal shooting of the Border Patrol agent was the result of so-called "friendly fire."  In the dead of night, responding around 2 a.m. to a routine alarm of a tripped body-motion sensor in primitive desert five miles from the border, near Bisbee, agents evidently mistakenly fired shots at each other.  One agent, Nicholas Ivie, was killed and another was hospitalized (and later released) with gunshot wounds. A third was not hurt.

The Arizona Republic newspaper in Phoenix is now covering the story reasonably accurately, as is the woefully understaffed, dispirited Tucson paper -- now that the F.B.I. has handed out a press release. Here's today's story in the Arizona Republic, with confirmation from the F.B.I. that the shootings were accidental and did not involve hostile fire. But note that the story calls this a "stunning development." Well, maybe it seems "stunning" today -- but only if you had failed to see the obvious from the beginning. The story also inaccurately states that the Border Patrol reported that the agents were on foot. Not so. The initial Border Patrol press releases had them on horseback. No one has addressed that oddity.  Oh, wait: The Los Angeles Times, apparently enamored of that Old West cowboy-in-the-moonlight image, still has them on horseback today!]

The two surviving agents -- whose accounts were conspicuously missing from the initial media reports -- have hired lawyers.

(Watch how fast this story gets downplayed and disappears, now that it's clear the media botched it. Absolutely in character when they're dead wrong, reporters still persist in holding onto a bogus report, with half-assed sourcing that seems to stem from something somebody told a Fox News affiliate in Texas, about two arrests made in Mexico. Maybe the Mess'cins did have something to do with it, they are obviously suggesting. Well, maybe you're just covering your butt, I would say.)


From the first reports of this incident, it was apparent to me -- and should have been clear to any reporter with the most basic news instincts -- that something did not add up in the Border Patrol account. The agency's initial report, well into Tuesday afternoon, asserted that the three agents were on horseback when they either were ambushed around 2 a.m. by, or somehow became involved in a gunfight with, assailants who were presumed to be drug smugglers who had crossed the border from Mexico.

Horseback? In the dead of night? In that rugged, rocky terrain? Even though it was a bright moonlit night, that made absolutely no sense to anyone who knows anything about riding a horse.

Then the Border Patrol changed its story -- and the credulous media waltzed along with the new version, never wondering about the difference from the old.  No, wait: the agents were on foot! But did the media then ask, well, where did this horseback information come from? They did not, not that I could tell.

Did reporters on the scene ask what the two surviving agents, who were obviously witnesses, had told their supervisors about the incident? What had they seen? And what kind of gunshot wounds were found? How many shots were fired, by the presumed assailants and by the agents themselves? The most obvious signal that this story did not add up was the absence of any public accounting by the two surviving witnesses.

But no, the media did not ask those questions (or if it did, the stories in print and on the supremely credulous Tucson television news stations did not reflect it). Instead, the media accounts -- local, regional, national -- all curled up in the cozy narrative formed by the right-wing political hysteria over "Fast and Furious," the botched sting by the Alcohol, Tobacco and Firearms office out of Phoenix (abetted by the U.S. Attorney's Office in Phoenix) that inadvertently led to the 2010 murder by a drug smuggler of a Border Patrol agent, Brian Terry, who was shot by a gun that was traced back to the Fast and Furious sting.

The usual cheap right-wing opportunists from the statehouse in Phoenix rushed in on Tuesday to politicize this latest shooting, along with a predictable selection of the odious Tea Party rabble-rousers, state and national divisions.

For example, the notorious numb-nuts sheriff of Pinal County, Paul Babeu, had the case cracked in an Ariaonz minute.

"All information is pointing that this is connected to the violent drug cartel smuggling in this high smuggling area," Babeu said in a statement issued by his office and dutifully repeated by some media. He also appeared on a local Fox News affiliate, authoritatively not only blaming the Mexicans for the death, but even speculating about the kinds of illegal weapons involved.

According to the weekly Phoenix New Times, hands-down the best newspaper in Arizona, the Fox Report had this headline: "Sheriff Babeu: Agent shooting suspects likely using military grade weapons." Babeu said, according to the New Times report:  "Whether they're bandits or whether they're actual cartels members, what they have, oftentimes, is they're armed to the teeth, to the same level, if not, greater than local law enforcement. They have, usually, AK-47s, semi-automatic, sometimes fully automatic weapons."

Babeu, you'll recall, is the worthy who not long ago got jammed up after sending his fetching photo and other particulars to a gay hookup Web site -- causing some surprise his extremely conservative constituents in little Pinal County, until that point unaware that he was gay. His former boyfriend also has accused him of threatening him, and there are official investigations into the operation of Babeu's office.

But he sure does know a Mexican hit squad when he imagines one.

In general during the awful media performance on this story, the facts, or the lack of the facts, did not seem to matter. Killed-by-illegals was the knee-jerk narrative, spun by reflexively politicized local sheriffs in the highly militarized border region, supported initially by the Border Patrol who presumably had some deductive information when the witnesses clammed up, bought into readily by lazy media who failed to ask the most simple questions of the authorities when this occurred:

What happened out there? Who shot whom? And who knew what, when? That's police reporting 101.

The acting sheriff of Cochise County, Rod Rothrock, made this statement in a press conference yesterday when it was announced that Agent Ivie had been shot during gunfire exchanged among the three agents, each firing from defensive postures, once Ivie started shooting.

"Had they been encountering drug smugglers or whoever, their actions would have been appropriate. It's just tragic they encountered each other."

Cochise County has an acting sheriff because the well-liked elected sheriff, Larry Dever, a prominent voice in the right-wing drive to thoroughly militarize the border and flood it with armed agents, died Sept. 18 when the vehicle he was driving rolled over on a Forest Service road. Dever was drunk at the time, the medical examiner's office said this week. His blood alcohol content was a staggering (and nearly comatose) .29.