Frankenstorm and the Boy Who Cried Wolf 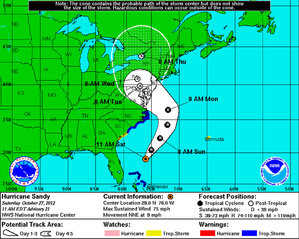 It's interesting to watch other people's weather when you live in a place like southern Arizona, where the only real changes in weather are from "nice and warm" to "nice and really, really hot."

So here we go once again with all this media carrying-on about the apparently approaching East Coast Storm of a Lifetime, or Frankenstorm, or whatever the TV dramatists are calling it now.

Remember the Boy Who Cried Wolf.  That's kind of what happened on the Northeast Seaboard in 2011. The lesson is apt, because this storm is looking like the real thing, and people who shrug it off may have some 'splaining to do.

Remember August 2011, when a good chunk of the coastal areas of New York City and the New Jersey coast were ordered evacuated by the imperious New York mayor, Michael "Hurricane Mike" Bloomberg and the combative New Jersey governor, Chris "Thar She Blows!" Christie? Turned out that except for flooding in upstate Pennsylvania and New York State, there was no emergency of a degree sufficient to get as excited as these two did. It just rained.

This one could peter out too, though as I said, it sure looks real from here in the Sonoran desert.

You never know, given the degree to which the media will turn on the hysteria pipes at the least excuse. You know it's coming at you full blast when some TV reporter informs you that the supermarkets are running out of toilet paper. (Why can't people take some clues from the prudent Mormons, and maintain well-stocked off-the-grid home supply caches in case of the Second Coming or whatever it is they're preparing for?)

As of now, "Thar She Blows" Christie, who ordered New Jersey's coastal areas to evacuate as Hurricane Irene hysteria mounted in 2011, is playing it less dramatic. "I encourage all families to stay informed, get ready, and reach out to those you know who may be isolated, or in need of extra assistance," Christie tweeted today.

[UPDATE: Christie today ordered the Jersey Shore barrier islands evacuated. Most of New Jersey's seashore communities aere on those narrow, storm-vulnerable barrier islands just off the coast. And those islands haven't been tested in a major direct-hit hurricane/severe winter-like storm since the 1960s, way before most of them became extremely developed.]

This is going to be interesting.

Meanwhile, if you're planning to fly anywhere near the Northeast early next week, I have some advice:

The air travel system -- which the airlines have been allowed to shrink to the point where there is absolutely no slack to handle disruptions -- is likely to descend into chaos.