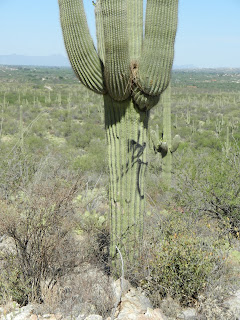 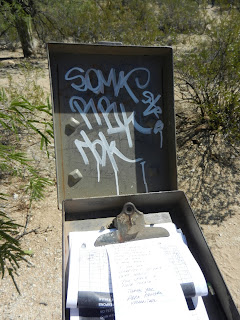 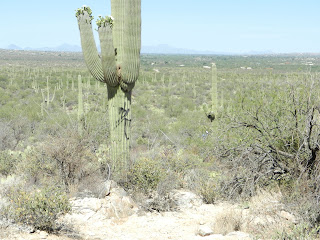 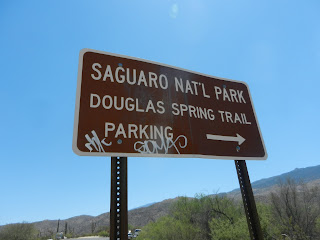 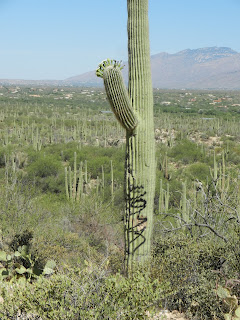 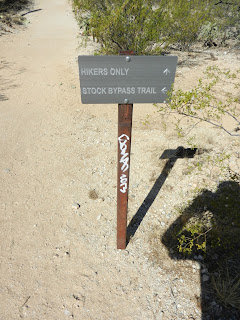 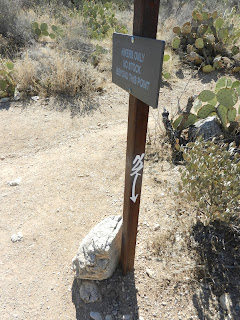 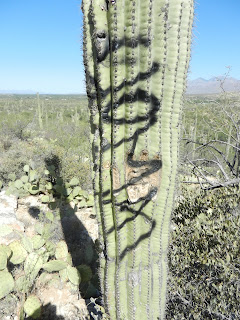 Usually, the job consists of simply being visible, while being available to give directions or other information to the occasional lost hiker, or prepared to provide water, assistance or simple first aid to hikers who run into trouble, most notably during the brutally hot season in the Sonoran desert of southern Arizona.

Occasionally, I also volunteer to be basically the Park Service's version of a Wal-Mart greeter, stationed on foot at one of the popular trail-heads, where I enormously enjoy meeting people bound for the trails, and providing useful information (we had mountain lion sightings last month, and you need to warn some people who don't look like regulars about snakes, bee-swarms and other potential perils to the unwary).

I was doing this starting at 7 a.m. yesterday when a hiker came back from the Douglas Spring Trail and told me that he had seen widespread vandalism. After a few other hikers reported the same, I hiked up a couple of miles myself -- and was appalled at what I saw (see my photos above).

Some moron or morons, with base malice, painted graffiti on rocks, signs and even on saguaro cactuses. I saw big saguaros defaced by these criminals, and I made some calls to various Park service numbers and 911 -- but the only response I got was from a county deputy sheriff, who arrived at the scene and was sad to explain that, while he did not have jurisdiction on federal land, he'd look around on the periphery. Which he did.

I went back onto the trail and took photos of the damage and, after my shift as a volunteer had ended,  I notified some people in the local media in Tucson.  KOLD, one of the local television stations, sent  a reporter and a cameraman to my house near the park, and I took them up the trail for a detailed report on what was obvious to anyone on the trail, which they ran last night. The local paper, the Arizona Daily Star, also asked for my photos and ran a front-page story this morning. At least one other local television station is following up today. [UPDATE: And the story went national after people got back to work and started returning phone calls on Monday]

This might be a very good opportunity, then, to address some of the effects on beloved institutions like the National Parks created by the budget shenanigans perpetrated by the now-thoroughly-disreputable U.S. Congress, specifically sharp budget cutbacks caused by sequestration at government agencies like the National Park Service. If the National Park Service is upset about not getting out front on this story yesterday, when the media interest became intense, the opportunity exists today and beyond to address the very real consequences of severe budget cutbacks in our glorious national parks.

[Updated: Dismayingly, I found on Monday and later in the week, the official Park Service response was focused way too much on the media -- as if the media could somehow be held back on Sunday till a "press release" had been prepared and cleared through burueaucratic channels, on an incident that had been in full public view, to anyone hiking those trails, for over 24 hours before the Park Service acknowledged it. The reaction of the National Park Service Tucson branch was depressingly of a cover-your-butt bureaucratic nature, mainly because the park dropped the ball on Sunday and didn't try to address the story till Monday, after it had been in the local and even national media.]


There have been other instances of vandalism in national parks, most recently at Joshua Tree National Park in California, where graffiti criminals defaced boulders. The vandalism at Saguaro National Park was less in scope, but rather more striking because as many as a dozen magnificent saguaros were defaced. Just look at those saguaros in the photos above. Some of those very saguaros, stately icons of the Old West in southern Arizona, have been standing in those spots literally since the days when Wyatt Earp and Geronimo roamed this desert landscape.

Incidentally, what's the significance of  "Soma" -- the graffito so unartfully scrawled on several of the cactuses and many of the rocks?

Well, it's probably futile to waste too much time trying to understand the mind of a moron. But one  potential explanation is that our criminal vandal[s] might be making a probably unintended literary allusion -- which I hope will be of good use to them once they are caught and subsequently enrolled in one of those arts classes that are taught in our state prison systems.

"Soma (Sanskrit सोम sóma), or Haoma (Avestan), from Proto-Indo-Iranian *sauma-, was a Vedic ritual drink[1] of importance among the early Indo-Iranians, and the subsequent Vedic and greater Persian cultures. It is frequently mentioned in the Rigveda, whose Soma Mandala contains 114 hymns, many praising its energizing qualities. In the Avesta, Haoma has the entire Yašt 20 and Yasna 9-11 dedicated to it. It is described as being prepared by extracting juice from the stalks of a certain plant. In both Vedic and Zoroastrian tradition, the name of the drink and the plant are the same, and the three forming a religious or mythological unity.

"... From the late 1960s onwards, several studies attempted to establish soma as a psychoactive substance. A number of proposals were made, including one in 1968 by the American banker R. Gordon Wasson, an amateur ethnomycologist, who asserted that soma was an inebriant, and suggested fly-agaric mushroom, Amanita muscaria, as the likely candidate. ..."

"...Soma is [also] the name of a fictional drug in Aldous Huxley's 1932 novel, Brave New World. In the novel the drug produces both intoxicating and psychoactive properties and is used in celebratory rituals. It is described as 'All of the benefits of Christianity and alcohol without their defects." Another drug derived from mountain growing mushrooms is featured in his 1962 novel, Island, in which it is used in a Hindu-based religious ceremony worshipping the god Shiva. Called moksha medicine it is portrayed in a positive light, as a key to enlightenment.

"In the books Junkie and Naked Lunch, author William S. Burroughs refers to soma as a non-addictive, high-quality form of opium said to exist in ancient India.

"In Neil Gaiman's novel American Gods, soma is referred to as "concentrated prayer", a drink enjoyed by the gods (who feed on people's worship), such as Odin.

"The single "Soma" by the indie rock band The Strokes focuses on soma and its effects."

Well then, some mystery clues for the constabulary to pursue.

Less grandly, Soma is also an old street nmame for the drug PCP.

But let's forget the fancy allusions. Probably "Soma" is just the name of some moron's gang girlfriend.

You're overthinking it. The tagger's name is probably Amos. Or his father's name is Amos. Something.