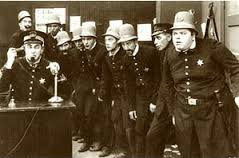 For a journalist, it can be useful, if extremely distasteful, to find yourself on the other side of a story -- and the Saga of the Saguaros at Saguaro National Park in Tucson has been a case in point for me. It's astonishing to see how facts can be so malleable.

Here we have, in the New York Times no less, a spin job by the Keystone Kops at Saguaro National Park that gets much of its information from the very same park rangers who neglected to respond to reports of the incident for 24 hours after I dutifully reported it, including the ranger who failed to respond at all when I informed him of the vandalism when it was discovered one recent Sunday morning.

Ta-da: I give you Ranger Steve Bolyard, marching around on the front page dispensing wisdom in a story in which "social media" is unaccountably blamed for the vandalism. And I give you crack Ranger and "Chief Interpretation and Outreach Officer" Andy Fisher, hands proudly on hips, posed in the very media itself above a rock showing the very graffiti vandalism that she and others in the Keystone Kops at Saguaro National Park fired me for "approaching the media" about.  You can't make this stuff up.

Weirdly, the park service Tucson division is also evidently trying to make a case, with no evidence beyond speculation, that "social media" is to blame for the vandalism of those magnificent saguaro cactuses that the National Park Service is supposed to be protecting -- when in fact it's trying to cover up its own ineptitude in the incident. and you can blame anything on "social media," just as they used to blame everything on "rock and roll" in the 1950s. Those damn kids and their music  social media.

I found the lede on the report downright hilarious: "When Steve Bolyard checked out a report of black paint on some of the park’s majestic saguaros — cactuses whose towering bodies and upraised arms are as emblematic of the American West as red-rock buttes and skittering tumbleweeds — he did not expect to see ganglike calligraphy covering more of them than he could easily count."

Well, I'll take some exception to that, thank you. If Steve Bolyard finally "checked out a report of black paint" he did so quite a while after that report initially came to his attention and he failed to respond.  And it's untrue that he "did not expect to see ganglike calligraphy" on the saguaros, because I had fully informed him of the vandalism, and offered him all of the photos I had taken of it. He was not interested, at least when I informed him as part of my duties as a volunteer ranger.

As to his reported inability to "easily count" the defaced saguaro cactuses, assuming that he actually did in fact finally hike up the trail at some point to inspect the damage -- well, I leave that to your estimation. Myself, I counted 14.

But then, I was actually there.

Here is what happened at Saguaro National Park on the day the vandalism was first reported, by me, after I got off-duty from a shift as a volunteer park ranger. Ranger Bolyard figures prominently in the tale:

After being informed of the vandalism by other hikers early that morning, I hiked up the trail and checked it out myself, taking photos, during my four-hour shift as a volunteer park ranger.  I then made numerous phone calls that morning to various Park Ranger numbers (and also to 911 and the sheriff's department, which did properly respond, but the deputy sheriff who arrived told me he had no jurisdiction on federal land).  Finally, in an effort to make a full report, I managed to talk by phone with the elusive Ranger Bolyard, who was the ranger on duty, though I never saw him that day.  On the phone, he simply blew me off.   Bolyard wasn't interested in my report or in the photos I had. I told him that I would probably take them to the local media then, and he offered no objection.

So, after having assiduously followed all procedures, including calling 911 and other rangers and speaking directly to the ranger on duty, I went home after my four-hour shift ended and, hours later, concerned that the rangers seemed to be asleep at the switch, I contacted the local paper and one of the TV stations to tell them about the vandalism that every hiker on that trail was seeing that day.

The next day, after a story and photos ran in the paper, the Daily Star (and on the local TV station, KOLD, the night before), the Park Service suddenly went into full cover-up, defensive-crouch mode. To me, the message was: How dare you report vandalism that had not been properly vetted for release by the park's amusingly titled Chief Interpretation and Outreach Officer, Ranger Fisher (reporters accurately refer to her as the flack, incidentally.)

On Monday, the Keystone Kops Park Service hastily put out a day-late press release about the vandalism and released photos that were remarkably identical  similar to those I had taken of the damaged saguaros on Sunday. And then rangers spent the rest of the week trying to force me to "recant" for "approaching the media," including at a disciplinary hearing that I attended with some amusement on Thursday, in which Ranger Fisher and another ranger, Paul Austin, importuned me to admit fault and promise to sin no more in talking to the media. Finally, a day later, they had the ranger in charge of the Park volunteers fire me by phone on Friday after I refused to back down and admit guilt for refusing to renounce  Satan and all his sins "the media." One of the amusing sidebars, of course, is that I have been a journalist and hence a foot soldier in said media for 45 years.

In the lamentable week-long process, I received some good-natured razzing from friends in Tucson for managing to get myself fired from a volunteer job. It was also, as they say, a learning experience. But the truth is, I enjoyed my work as a volunteer on the trails and as a volunteer mounted ranger on horseback, and in days of sharp staff and budget reductions at the National Park Service, the agency needs unpaid volunteers more than ever to assist rangers in their important duties.

Meanwhile, I'll drop my uniform off at the visitor's center, guys. Maybe you can find somebody as good who will mount up and be willing to work with you.

You could also try social media, but that's not so good at hiking a trail or riding a horse.