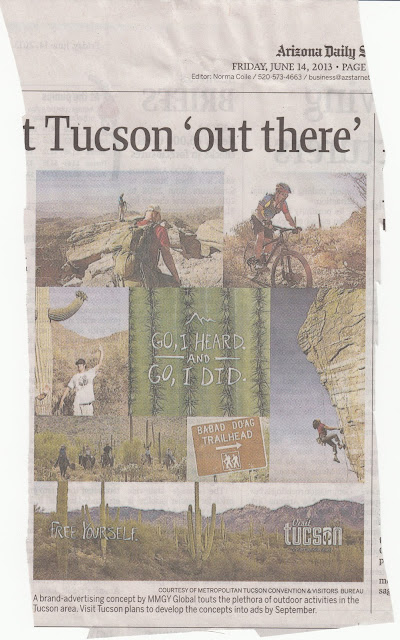 Well, you do get what you pay for. But really, someone ought to be asking who paid what for a new "Visit Tucson" ad campaign, launched to much local media giddiness this week here in Tucson.

The ad campaign features concepts by a company called MMGY Global, including one (see center panel of above photo from yesterday's Arizona Daily Star) that depicts a saguaro cactus defaced with the inane slogan, in graffiti form,  "Go, I heard. And Go, I did."  Right, an ad showing a graffiti slogan on a saguaro.

That's a bad mistake, especially given recent publicity about odious vandals who damaged more than a dozen giant saguaro cactuses in Saguaro National Park, while park rangers were asleep at the switch (well, except one who did report the crime, a certain volunteer ranger who got fired for telling the media about the vandalism). Maybe the crack Keystone Kops who botched the actual graffiti vandalism incident last month and then tried to cover up their malfeasance by firing a volunteer for "approaching the media" can add the ad to their files.

Incidentally, here's an atta-boy or atta-girl to the Daily Star editor who clearly saw the irony in the photo they published, without comment.

Joe, thank you for sharing your opinion. We appreciate your feedback about using text over a saguaro, especially in light of the recent vandalism at Saguaro National Park. We apologize for any offense our concept may have caused, it was certainly not our intent to imply anything negative. These designs were in production long before any incidents occurred.

We wanted to incorporate different textures into these concept posters, the saguaro being one. Truth is, we really didn't think people would interpret it as literal graffiti. The majority of folks see it for what it is, a creative element within a much larger campaign.

It's also important to note that these are just concepts, nothing that was in the Daily Star article is set in stone. The image designs that ran with the story are simply preliminary ideas that we will be able to build off of for years to come.

The saguaro is an icon of the Sonoran desert and in no way are we extolling the defacing of such a celebrated symbol of our region. In fact, that’s why we chose to keep the saguaro as part of our new logo. (Visit Tucson: The anatomy of a logo video http://youtu.be/XeZ6mM7PZ8E) Tucson isn't Tucson without it.

I'm curious. It seems to me that having missed the boat on cactus protection, the NPS could stage something of a recovery by attempting to clean or restore the damaged landmarks. Can anything be done in this regard? Can the paint be gently removed?

And, is the NPS doing anything to prevent more vandalism, which seems to have become a competitive sport fostered by advertising,