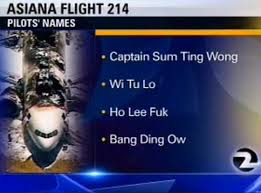 There is definitely some.thing.wrong with the lame explanation being trotted out by a Bay Area local television station for the roaring goatfuck of a fiasco yesterday, in which one of their anchors actually read those clearly ridiculous names (above) on the air as being the names of the pilots of the Asiana Airlines 777 that crashed in San Francisco last week. (This just in!)

Yes, she read them on the air, showing not a trace of cognizance that the names are obviously part of a hoax. The video has gone major viral. Here it is.

The television station, KTVU-TV,  a Fox affiliate in Oakland, Calif., has apologized for the idiotic gaff, but in the cheesiest way possible. Yes, the station worthies say, we made a big mistake. But part of the blame, says KTVU,  lies with the National Transportation Safety Board (N.T.S.B.), where "an N.T.S.B. official" actually confirmed the names to KTVU.

And, astonishingly, the N.T.S.B. has put out a statement admitting that "a summer intern" (hardly an "official," but more on that in a minute) did in fact erroneously and without having authority to do so confirm those names to the TV station. Here is that utterly remarkable statement.

Now, of course, there is a tradition of pranks, including phone calls and absolutely hilarious prank airport announcements, that depend on the phonetic comic effects of hearing syllables in seemingly legitimate foreign names of many syllables. Some of these actually were recorded at Heathrow Airport, where pranksters posing as taxi drivers looking for their customers handed written names to an unsuspecting airport public-service announcement workers, who would then get on the loudspeakers and ask for people like the following to please contact airport information: "Arheddis Varkenjaab and Aywellbe Fayed." (Sound it out).

The prank genre also includes western names -- "I.P. Daily" being the earliest example I can think of, and I think I was maybe 11 years old when I first heard it. And Bart Simpson famously makes prank calls to Moe's Tavern, causing Moe to answer the phone and credulously call out to the customers things like "Hey, has anybody seen Mike Rotch?"

And more recently, the newspaper than nobody pays for, USA Today, printed an article in which a version in the the good old "Ophelia Bush" turned up. Not to mention the poor hapless New York Post, which had a run for several years of being pranked by young wiseguys quoted in routine stories who identified themselves as "Heywood Jablome."

So as admittedly insensitive as the Asiana prank was, considering that three people died and many were injured, the issue to me isn't "racism" as much as it is a certain brand of media and bureaucratic piety at work. That is, how did this prank actually occur, and why haven't the TV station and the N.T.S.B. been pressured into giving a cogent, honest explanation?

Here are the questions they aren't asking and that should be asked:

1. How the holy crap did this prank get on the air on the newscast of a major local television station? And don't give me that, "Well, an N.T.S.B. official confirmed it." In which way, specifically, did that N.T.S.B. summer intern "confirm" the names? In a phone call?  By e-mail?

2. If in a phone call, did that not then require the names to be vocally read out to the "N.T.S.B. official?"

3. Aside from some so-far anonymous summer intern confirming them in some manner that hasn't been explained, how did KTVU come up with those names in the first place? This was a cognitive process. Someone in the KTVU newsroom had to get the names, look at them, and then make whatever minimal effort was required to "confirm" them with the N.T.S.B., by phone call or e-mail. In that contact with the N.T.S.B. intern, the names either had to be pronounced on the phone, or typed into an e-mail that was read by at least two parties. Then those names had to be physically typed onto that slide, or whatever they call it that card they show on the screen. Certainly, in the KTVU newsroom itself, at least one conversation had to occur about this "breaking news" event before it went out live, with the anchor woman credulously reading the joke names.

4. At the N.T.S.B, the PR chief needs to be required explain how this got screwed up. The N.T.S.B. "apology" is unclear and inadequate. Who specifically did the confirming? How? If in an e-mail, what is the text of that correspondence? If a phone call, what specifically was said by both parties?

5. Are the media going to let this television station get away with claiming that an "N.T.S.B. official" confirmed these ridiculous names, without asking how that exchange actually went?

The Asian American Journalists Association asked a good question. In a statement, the group said, "... the names originated from somewhere — and we fail to understand how those obviously phony names could escape detection before appearing on the broadcast and were spoken by the news anchor."

Local TV news is a sad joke all across the country, but this screw-up at KTVU seriously ups the ante. How in the world did this happen? I'll bet the answer is even funnier than the prank itself.