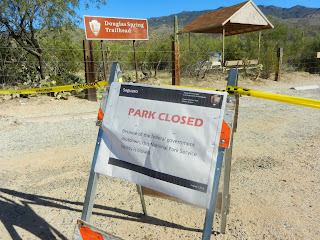 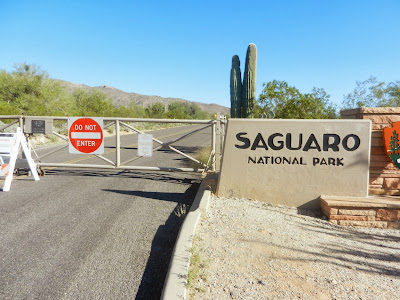 The closing of Saguaro National Park is neighborhood news where I live, adjacent to the park, on the east side of Tucson. Everything's shuttered, including access to hiking and horse trails.

But in a way it's also international news. As I was taking a photo at the main gate of Saguaro National Park this afternoon, a nice German couple drove up in a rental SUV with Texas tags and were surprised and very disappointed to find it shut -- as, of course, all other national parks are.

"Since today?" the woman asked. "We have been driving all day from Texas."

I apologized to her, as an American citizen appalled by the Republican radicals' attempts to continue a rolling coup d'etat and, ultimately, overthrow the government. (Something that at least older Germans might have some terrible familiarity with.) That coup began with the asinine impeachment of Clinton on spurious charges, reached full speed with the outright theft of the 2000 presidential election, indulged itself in the incompetence that allowed 9/11 to occur, followed by lying us into a war, and of course has been at full speed in the last five years trying to delegitimatize the 2008 election and destroy Obama, since they couldn't defeat him in a national election.

Or maybe it's the logical continuation of the cynical, antidemocratic Southern Strategy policies based on paranoia, criminal conspiracy and racial hysteria, accompanied by shrew gerrymandering, that were cooked by the Nixon cabal.

[Andrew Sullivan addresses that well today: "How does one party that has lost two presidential elections and a Supreme Court case – as well as two Senate elections  -   think it has the right to shut down the entire government and destroy the full faith and credit of the United States Treasury to get its way...? ...[This] it is an attack on the governance and the constitutional order of the United States....When ideologies become as calcified, as cocooned and as extremist as those galvanizing the GOP, the American system of government cannot work. But I fear this nullification of the last two elections is a deliberate attempt to ensure that the American system of government as we have known it cannot work. It cannot, must not work, in the mindset of these radicals, because they simply do not accept the legitimacy of a President and Congress of the opposing party. The GOP does not regard the president as merely wrong – but as illegitimate. Not misguided – illegitimate...."
... This is not about ending Obamacare as such (although that is a preliminary scalp); it is about nullifying this presidency, the way the GOP attempted to nullify the last Democratic presidency by impeachment. ...]
Today's Republican right-wing anarchists who cynically engineered the government shutdown because they didn't like the health care law and were unable to change it through democratic means would never apologize, of course. Because their goal is failure of the U.S. government, and as things are going, the anarchists could well succeed one of these days. Unless we stop them.