Sleep Well Tonight ... Your Air Force Is Back On the Job After a Frightful Rumor About Some Guy Who Maybe Had a Gun 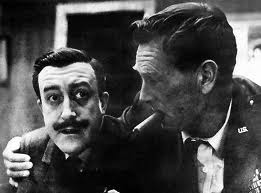 TUCSON -- Jayzus, this is the same country that won the Battle of Midway?

Local media in Tucson were characteristically complacent yesterday in breathlessly reporting a rumor that some guy who might have a gun was maybe "on the loose" at a big Air Force base in town, causing the whole base to shut down on high alert.

Just a rumor. And another case of hysterical overreaction.

Not to worry, though. The base is back to normal today after what the local paper calls "a frightening day at Davis-Monthan Air Force Base [that] ended peacefully Friday after a daylong lockdown spurred by fears that a gunman might be on the loose inside the military installation."

The ad-fat local paper, the Arizona Daily Star, has been protecting its high profit margins by laying off staff and replacing some with unpaid interns. The paper reports today, without irony or apparent attempt at self-examination, that other media were reporting false rumors during the day yesterday. It says, "Nationwide, many news outlets, including the Arizona Daily Star, also reported erroneously that a man was barricaded on base in a standoff situation."

A point of order is called for here, Scoop. The hair-trigger cable-news national networks that reported this false "breaking-news" rumor did so because they were initially picking up inaccurate reports from the local media, who were on the scene presumably employing at least a modicum of skill in assessing rumors and information.

Local news organizations that have slashed reporting budgets to squeeze every last possible cent in profits can no longer be depended upon for basic news-gathering, sorry to say. When your reporters can't, or won't, spend the time to develop good local sources, such as good sources on that Air Force base, you have no way to evaluate rumors on the run. Then you have no one to call but the official on duty, whose job it often is to mislead you. You in turn then mislead your readers and viewers.

Meanwhile, national news organizations like Slate, who really shouldn't be joining in this breathless "breaking news" craziness that's polluted the cable-TV universe, jumped in yesterday as if a major story were occurring, reporting half-baked and unsourced rumors. From Slate yesterday: "At 3:45 p.m.: Local news stations in Arizona are reporting that Davis-Monthan Air Force Base in Tucson is on lockdown, with a possible gunman on the loose.

According to a report posted on Fox 11 News, Tucson Fire officials have said shots were fired inside the base, and there seems to be at least one patient. A crowd has gathered outside the gates, and personnel inside have tweeted that they’ve been warned to stay inside and away from windows. Air Force officials have so far refused to say why the base is on lockdown."

(I especially cringe at the William Langewiesche-worth half-assed journalism locution, " ... there seems to be ...")

Late yesterday, some officer at the base did release a statement claiming that information on the all-day standoff had been withheld so as to not tip off "the suspect." There was, of course, no "suspect."

Today the Air Force isn't releasing much more information about the embarrassing incident except to say that we all are "safe." Whew! After all, Al Qaeda might be listening, and loose lips sink ships, or mothballed C-130s, whatever! Besides the Air Force police, local SWAT teams and hostage negotiators descended on the base, which occupies a big chunk of south-central Tucson. Roads were closed in the area.

Local paper: "In the absence of concrete information, social-media sites such as Facebook and Twitter exploded with rumors and false reports of gunfire and numerous casualties, striking fear in the hearts of some D-M personnel serving overseas."

No serious attempt appears to be underway to explain this bizarre incident. Security, don't you know.

Oh well, I'm off to ride a horse this morning in Saguaro National Park. Last weekend, my riding companion and I were on a quiet desert trail deep in the park when suddenly we heard and felt the thunder of two military helicopters, as of course did our terrified horses.

The choppers clattered down to about 150 feet above us to take a good look, to make sure that we weren't "terrorists," I suppose. It was the 10th anniversary of 9/11, and you never know if there is some nefarious plot to blow up a giant saguaro or hold a gila monster hostage. These Al Qaeda people know their deserts, after all.

Can't be too careful these days when fear rules all.