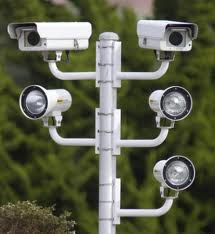 Here are excerpts from an anonymous (of course) comment from someone objecting to a recent post that ridiculed red-light cameras and the bogus claims being made for them.

Well, now. The Insurance Institute for Highway Safety is a lobby group funded by automobile insurers, a group of entities (not to put too fine a point on it) that would also have a financial interest in forcing everyone to drive 15 miles an hours in daylight hours only, and then only if the driver is between the ages of 25 and 55.

Our anonymous red-light camera lobbyist adds somewhat pointedly that he has "trust" that I don't run red-lights, with or without cameras.

Along with all of the other spurious and often bogus claims by the red-light camera lobby, that little hint is quite telling.

Of course I have crossed through intersections when the light abruptly turns red. Everyone has! Who among us has not suddenly found ourselves at a badly designed intersection, perhaps with a big truck fast on our bumper, and had to make an instant decision, based solely on a judgment about safety, when the light suddenly turns yellow?

There is a notorious intersection in a commercial district about three miles from my house where rear-end collisions are up by 40 percent in two years. Why? Because my city, tapping into the allegedly easy money offered by the red-light camera industry, has installed these insidious devices at that intersection. People I know now avoid businesses in that location simply because they do not trust the red-light cameras.

The cameras don't just flash when someone overtly "runs" the light (and "runs" is a term favored by the camera-industry lobby, in that it implies wanton disregard for public safety). Oh no! The industry has devised new ways to catch motorists "running" the red when they are, for example, just stuck in an intersection behind someone who dawdles on a left-hand turn and the camera flashes or, even more infuriating, making a right turn and being stuck slightly into the intersection when, say, a woman pushing a baby stroller crosses in the pedestrian lane and the light suddenly changes. The choice? Get flashed and pay up, or force woman and baby off the road.

I have never had a red-light camera ticket. Yet. But the increasing number of people I know who have been trapped by these odious devices are all safe drivers -- not the idiots who actually do run red lights with disregard for public safety. To a person, they are outraged at the injustice of these devices. They claim that the red-light they allegedly ran was really a yellow light timed too fast (and lots of real studies have shown that normal yellow-light times are shortened at most intersections that have red-light cameras). And they are stunned to find that the ticket also includes mandatory attendance at a "safety" school where the fee is in the $300 range and the cynicism about the system, from attendees and "instructors" alike, runs shockingly deep. Everybody feels that justice is mocked. Everybody knows that red-light cameras are a scam!

Independent studies (that is, studies not funded by the industry or its accomplices) have always found that red-light cameras are simply a bad idea. And they are also a dangerous invasion of personal privacy, not to mention a base insult to legal due process. The dopey media, especially the local dimwits, can always be depended upon to parrot the red-light and speed-camera industry, mainly because the dopey media don't have the brains or even the courage to cogently evaluate research.

The National Motorists Association, a vocal and reliable opponent of these surveillance cameras (which gets some funding from the highway-engineering industry that lobbies for better intersection safety-design) does do intelligent evaluation of the data. I recommend that anyone interested in the subject peruse its Web site. This is its basic position on red-light cameras:

The NMA opposes the use of photographic devices to issue tickets. With properly posted speed limits and properly installed traffic-control devices, there is no need for ticket cameras. They can actually make our roads less safe.

1) Ticket cameras do not improve safety.
Despite the claims of companies that sell ticket cameras and provide related services, there is no independent verification that photo enforcement devices improve highway safety, reduce overall accidents, or improve traffic flow. Believing the claims of companies that sell photo enforcement equipment or municipalities that use this equipment is like believing any commercial produced by a company that is trying to sell you something.

2) There is no certifiable witness to the alleged violation.
A picture may be worth a thousand words, but it may also take a thousand words to explain what the picture really means. Even in those rare instances where a law enforcement officer is overseeing a ticket camera, it is highly unlikely that the officer would recall the supposed violation. For all practical purposes, there is no "accuser" for motorists to confront, which is a constitutional right. There is no one that can personally testify to the circumstances of the alleged violation, and just because a camera unit was operating properly when it was set up does not mean it was operating properly when the picture was taken of any given vehicle.

3) Ticket recipients are not adequately notified.
Most governments using ticket cameras send out tickets via first class mail. There is no guarantee that the accused motorists will even receive the ticket, let alone understands it and know how to respond. However, the government makes the assumption that the ticket was received. If motorists fail to pay, it is assumed that they did so on purpose, and a warrant may be issued for their arrest.

5) Ticket recipients are not notified quickly.
People may not receive citations until days or sometimes weeks after the alleged violation. This makes it very difficult to defend oneself because it would be hard to remember the circumstances surrounding the supposed violation. There may have been a reason that someone would be speeding or in an intersection after the light turned red. Even if the photo was taken in error, it may be very hard to recall the day in question.

7) Cameras do not prevent most intersection accidents.
Intersection accidents are just that, accidents. Motorists do not casually drive through red lights. More likely, they do not see a given traffic light because they are distracted, impaired, or unfamiliar with their surroundings. Even the most flagrant of red light violators will not drive blithely into a crowded intersection, against the light. Putting cameras on poles and taking pictures will not stop these kinds of accidents.

8) There are better alternatives to cameras.
If intersection controls are properly engineered, installed, and operated, there will be very few red light violations. From the motorists' perspective, government funds should be used on improving intersections, not on ticket cameras. Even in instances where cameras were shown to decrease certain types of accidents, they increased other accidents. Simple intersection and signal improvements can have lasting positive effects, without negative consequences. Cities can choose to make intersections safer with sound traffic engineering or make money with ticket cameras. Unfortunately, many pick money over safety.

9) Ticket camera systems are designed to inconvenience motorists.
Under the guise of protecting motorist privacy, the court or private contractor that sends out tickets often refuses to send a copy of the photo to the accused vehicle owner. This is really because many of the photos do not clearly depict the driver or the driver is obviously not the vehicle owner. Typically, the vehicle owner is forced to travel to a courthouse or municipal building to even see the photograph, an obvious and deliberate inconvenience meant to discourage ticket challenges.

10) Taking dangerous drivers' pictures doesn't stop them.
Photo enforcement devices do not apprehend seriously impaired, reckless or otherwise dangerous drivers. A fugitive could fly through an intersection at 100 mph and not even get his picture taken, as long as the light was green!

A friend of mine lives in London where they have a great multitude of photo-radar tickets. Has no effect on safety, indeed, since most places are or become well known, there's a massive slow down as people drive past, then they resume a safe (but "illegal") speed.