The Vile Tells the Despicable: You're Crazy 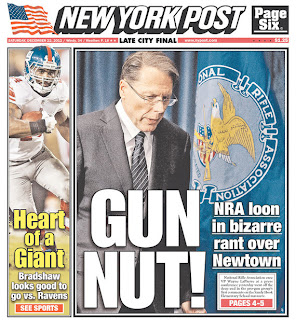 The merely vile Rupert Murdoch, who seems to have actually come down on the right side of the out-of-control-guns issue, appears to have given marching orders to the New York Post newspaper whose extreme right-wing views he shapes: The despicable NRA boss Wayne LaPierre is a "gun nut" whose so-called "press conference" the other day was nothing more than a "bizarre rant."

This follows a Twitter note from Murdoch in which he asked, "Will politicians find the courage to ban automatic weapons?" Fox News, it does not need to be said, has also been put on notice, though Murdoch writing about "courage" is to me akin to Hitler writing about courtesy.

Anyway, LaPierre, the Vietnam draft dodger who has unaccountably been permitted to shape himself as a kind of warrior in the 40-plus yeas he has been with the NRA, has gotten a sucker punch from his presumable pals on the ideological fringe where the heavily subsidized New York Post and its in-house co-conspirators Fox News and the (also subsidized these days) Wall Street Journal editorial page usually set a media agenda for right-wing reactionary ranks.

Now I want to see some reflection, in the general round-heeled media, on why 150 reporters showed up, dutifully as summoned, to LaPuerre's "press conference" the other day, an event marked by the rule that reporters couldn't ask questions of the NRA boss.

That's not a press conference, folks, that's a speech.

Here's a link to a story about the New York Post.

This follows a Twitter note from Murdoch in which he asked, "Will politicians find the courage to ban automatic weapons?"

Umm, aren't they already banned? Does Murdoch know ANYTHING about the guns he is shooting off his mouth about?