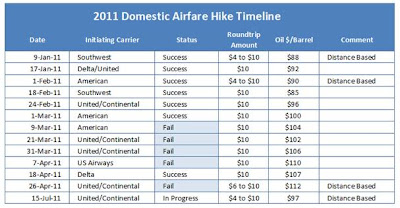 If it's Friday it might be time for another concerted fare-hike attempt by domestic airlines. Yup, the 13th this year, in which seven so far have been "wildly successful," says Rick Seaney of Farecompare.com, who watches this stuff like a hawk.

United/Continental launched the first domestic airfare hike attempt since late April this morning, he says. "United increased prices by $4 to $10 roundtrip (loosely based on trip distance)," he adds.

However, "fortunately for the domestic air traveling public the new airline economy ushered in by high oil prices in late 2007 requires domestic airlines to fill every middle seat with price sensitive folks – effectively limiting an unchecked rise in ticket prices," Seaney says. So the airlines appear to be biting into fare hikes in small increments instead.

"I suspect United is probing their competition’s appetite for a lift in ticket prices as airlines have some recent booking demand trend information after launching a couple of fall sales the past few weeks.