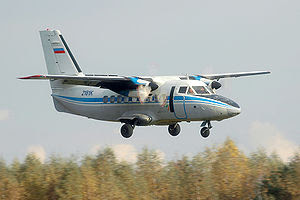 A Czech-built L-410 commuter plane crashed after takeoff from the northeastern Brazilian city of Recife, and at least 16 are dead. Here's the AP report.

The plane, flown by a Brazil airline, Noar Linhas Aereas has a capacity of 19 passengers and two crew.

This model of plane has been notable for fatal accidents worldwide in third-world countries over the years, including four crashes in Latin America. On September 10, 2001, a L-410 carrying 19 people, including University of Washington football fans and alumni association members, crashed into the jungle in Yucatán, Mexico, killing all on board. That disaster, of course, was largely overlooked in the media because of what occurred the very next day, which was 9/11.

One bizarre recent major L-410 crash (here) was in the very-dangerous-to-fly-in Congo, last Aug. 25. According to the single survivor, the L-410 crash occurred after a crocodile escaped from a duffel bag in the cabin and passengers stampeded to the front, throwing the plane off balance.

The most recent major crash was last February, when an L-410 operated by Central American Airways carrying 12 passengers and 2 crew members, crashed before landing at Toncontín International Airport. All passengers and crew were killed, according to the Wikipedia entry on the aircraft.