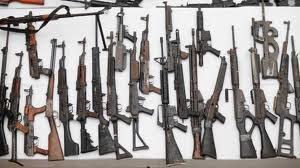 Dueling press conferences along the border following that weird incident where a woman in El Paso, Texas, was injured by a bullet that seems to have been fired in drug-war-torn Cuidad Juarez, two miles away in Mexico.

El Paso Police Chief Greg Allen says the bullet likely came from Juarez, because the woman, Maria Romero, was struck in the leg in downtown El Paso at the same time that Juarez cops were involved in a shootout (ho-hum, so common, these shootouts) with two carjackers. That's according to this story in today's El Paso Times.

No way, Jose, counters the mayor of Juarez, Hector Murguia, who asserts that "the bullet came from a Fast and Furious operation." The reference is to the notorious clusterf*** federal sting operation that stupidly sought to track drug smugglers by supplying a bunch of American guns to desperadoes south of the border.

I'm guessing both sides have a point here.