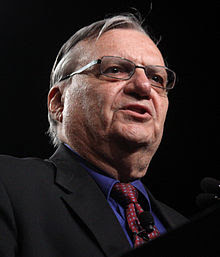 
Arizona, one of our most beautiful states, has been suffering mightily from as drop in tourism in recent years because of national ridicule over its contingent of the most ridiculous politicians since the heyday of Mississippi in the 1950s.

I thought that Gov. Jan Brewer, she of the startling Gidget haircut spilling over that Screaming Skull, took first-prize in asininity (so far) this year when she stuck her boney finger in the face of President Obama during what was supposed to be a casual meeting, after pressing on him a weirdly worded handwritten letter. There was something kind of strangely sweet, however, to see that concepts of drunk-dialing and drunk-tweeting are being applied to the venerable practice of handwritten notes.

Now comes ol' Sheriff Joe Arpaio, circus clown sans troupe, a-fixing to hold another press conference today in which he will release the results of his crack investigative team's look into President Obama's right to be president as a native-born citizen.

Stop that laughing right now, the rest of you! Sheriff Joe is struggling to maintain his dignity, especially with that federal indictment looming.

Really, do me a favor. Overlook Phoenix and its suburbs full of a very strange element of miserable white people who moved there to get away from any exposure to reality somewhere else, and who have tried to make a desert look like suburban Indianapolis.

Yet even Phoenix has its charms, assuming you avoid looking at the crazy politicians wandering around talking out loud, like you used to see the deinstitutionalized wander in cities back in the 1970s, refusing to take their meds.

By the way, I often see critics denigrate Arpaio as a "cowboy," which makes me cringe on behalf of honorable cowboys, a group much maligned by those who know nothing of the culture of the cowboy West.

There ain't nothing remotely cowboy about that wild-eyed fat-ass Arpaio, who was born in Massachusetts and whose only exposure to an open range has been in the kitchen. "America's Toughest Sheriff," they keep calling him. Arpaio is about as tough as my grandmother. In fact, my gran could have probably taken him.

The crazies in Phoenix and its suburbs aside, much of Arizona is wonderful, and I'm going to start on a visit-Arizona kick here soon.

Meanwhile, don't miss Sheriff Joe's latest stunt today. The betting here is how many days this stunt will precede the federal indictment of Arpaio that's said to be looming. Or it may be that the feds are planning to finally take action against Arpaio's hideously mis-managed sheriff's office, maybe by placing it in receivership. Oh, the stories that will come out about county law enforcement in Arizona, once somebody started looking hard!

Naturally, the weak and timid Arizona media will avoid any context surrounding Arpaio's latest bizarre stunt (though I do credit the excellent and hard-nosed Phoenix alt-weekly, Phoenix New Times, for staying on Arpaio's case.)

I'm sure Jan Brewer, after she gets a couple into her at lunchtime, will be working on a way to upstage him.

[UPDATE: True to form, the dainty Arizona media, quivering in its frilly petticoats of objectivity, has covered this idiot's press conference (faithfully printing the AP's credulous account) and presented without ridicule his asinine assertion, which was obviously just pulled out of his ass, that the president's birth certificate is a forgery.]

[That credulous AP story is a prime example of a kind of "objective" or "balanced" journalism that has outlived any usefulness to the public good. This Phoenix New Times piece, on the other hand, rightly declines to treat Arpaio, his goofball "posse," and their risible assertions, seriously.]